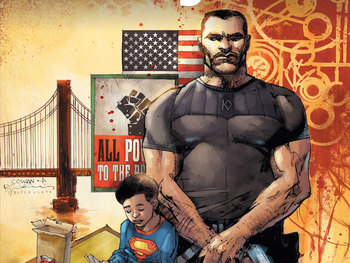 WildStorm: Michael Cray is a 2017 comic book published by DC Comics, as part of their Wild Storm imprint. A spinoff of their flagship title, it's written by Bryan Hill and drawn by N. Steven Harris.

Michael Cray is a man with problems. His employers, International Operations, have turned out to be using his skills at killing people for their own ends. And he's dying from a brain tumor. Only it's not a tumor, because tumors don't grant people super-powers.

So now, working for the enigmatic Christine Trelane and her company, Executive Protection Services, Michael is working for a new, and hopefully better cause, in exchange for a solution to his tumor problem. His first target is a crazed maniac by the name of Oliver Queen...