Literature / That Hoodoo Voodoo That You Do 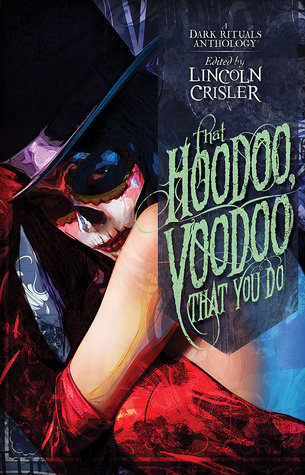 That Hoodoo Voodoo That You Do is an occult-themed horror anthology novel edited by Lincoln Crisler (Skinjumper) and published by Ragnarok Publications through its Angelic Knight Press imprint. Rituals have always been a powerful part of human life, from the ancient Aztec nation's human sacrifices to the simple act of brushing one's teeth in the morning. They can impart a sense of history, comfort, community, stability and at other times, power, mystery and horror. Some are grounded in centuries of tradition or superstition, while others are unique, individual creations.

In this collection of 22 stories, you'll find the darker side of ritual in all the various forms you can imagine–- from the ancient and ceremonial to the simple and homegrown. Some have real power, while others simply exist in the convoluted recesses of someone's mind. Some produce the desired effect, while others have an entirely different result. What binds them all together is the simple truth of any good ritual. Their practitioners-— and you, the reader-— just might be unalterably changed by them.