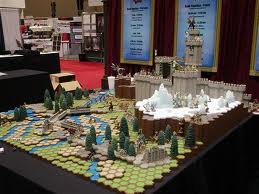 The Battle for All Time Has Begun.
"Armies marched, fought, claimed victory or conceded defeat, all for the wellsprings..."
—Quote from the first page of Thormun's Journal

Heroscape is a tabletop strategy game first published by Milton Bradley in 2004 (though it was transferred to Wizards of the Coast - also a of Hasbro subsidiary - in 2008). The game is played on a three-dimensional battlefield made of interlocking plastic tiles, with each player commanding an army of figurines. Usually, the goal is to completely destroy the other player's army, but there are other variants. There is an unoffical-offical website

with a very active community.

Now, there is a backstory concerning all the greatest warriors in the universe going to Valhalla to fight in an epic war to decide the fate of the cosmos. Frankly, though, none of that is terribly interesting and you'd be hard-pressed to find a fan who actually cares. What it comes down to is this: gladiators, wolf men, dragons, elves, vikings, valkyries, samurai, ninjas, zombies, robots, Ninja Pirate Zombie Robots, (no pirates though, sadly), orcs, knights, Bee People, jotuns, trolls, ghosts, cowboys, Marvel-brand superheroes, and Dungeons & Dragons characters are all duking it out on one battlefield.

As of November 3rd, 2010, Wizards of the Coast announced that it was cancelling production of Heroscape. In 2015, Hasbro released Magic: The Gathering Arena of the Planeswalkers, a Spiritual Successor of sorts that plays similarly but changes some of the rules and mechanics.