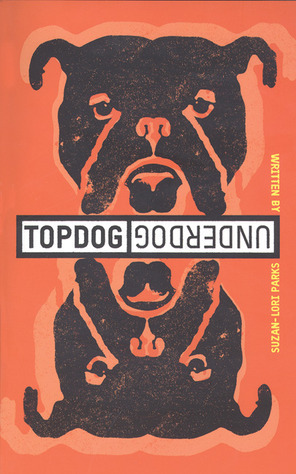 Topdog/Underdog is a 2001 play by Suzan-Lori Parks.

The entire play takes place in a single set—a shabby room in a boarding house—and has only two characters, who are named "Lincoln" and "Booth."

Yes, those are their names.

Lincoln and Booth are African-American brothers, trying to survive. They have been each other's only family since first their mother, and then their father abandoned him. Lincoln, the older brother, used to run a three-card monte scam, and he was quite good at it. But after one of his partners got shot and killed, Lincoln left the criminal life. He now has a straight job as...wait for it...an Abraham Lincoln impersonator, in an amusement park attraction where he dresses up as the 16th President of the United States at Ford's Theater, and tourists pretend to shoot him.

Meanwhile, his brother Booth is jobless. Booth has ambitions to follow his older brother into three-card monte scamming, but he's not as good at is as Lincoln is. Booth has an ex-girlfriend named Grace, whom he hopes to win back.

The original off-Broadway production featured Jeffrey Wright as Lincoln and Don Cheadle as Booth. When the play hit Broadway in 2002 Wright returned as Lincoln and Mos Def played Booth.