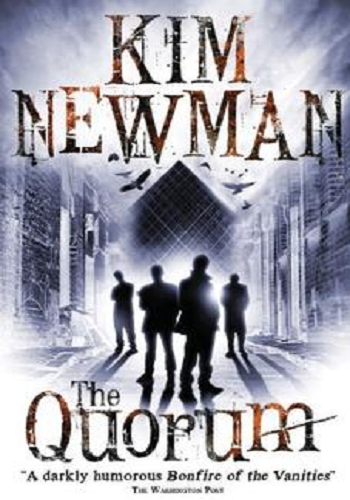 The Quorum is a 1994 horror novel by Kim Newman. It presents a Deal with the Devil updated for the Greed-is-Good Eighties: why sell your own soul for worldly success if you can sell somebody else instead?
Advertisement:

Four young men who have been friends since their school days meet for a reunion. After one is separated from the group, the remaining three meet a mysterious figure who offers them a deal...

Years pass. As the year 1993 dawns, Mark, Michael and Mickey have gone on to fame and fortune in their respective fields, while Neil is mired in obscurity and beset by bad fortune; every time he seems to be getting his life together, something goes disastrously wrong. Down-at-heel private investigator Sally Rhodes sets out to find out if somebody really has it in for him, and finds that the truth is very strange indeed.