Music / What We Did On Our Holidays 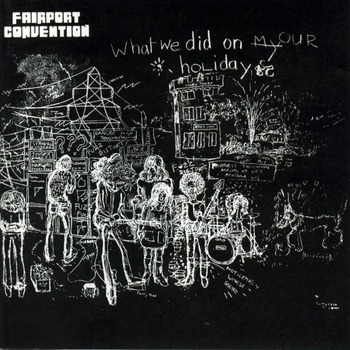 "You can all stay behind after class until whoever desecrated my blackboard owns up"
"[of Sandy Denny] She stood out like a clean glass in a sinkful of dirty dishes"
—Simon Nicol
Advertisement:

The second album from Fairport Convention and the first to make much impact on British record buyers, thanks to promotion by John Peel on his Sunday afternoon BBC Radio show. It was also the first of the band's albums to be released in America, as Fairport Convention. Folk singer Sandy Denny joins the band for the first time, bringing some of her own songs with her as well as providing the an ethereal voice that characterises the band's classic lineup in this and the next two albums. It's also Iain Matthews' final album with them and thus the only Fairports album to feature Denny and Matthews harmonaising together; a sound not easily forgotten once heard.

There are already signs here of the band's shift in direction away from the style of American 'folk' bands towards a distinctively British sound of electric rock blended with traditional ballad forms. This shift would take place gradually over the three albums of Fairport's classic phase. The Richard Thompson song "Meet on the Ledge" became the band's constant theme through its many changes up to the present day.

Tropes on the Ledge: