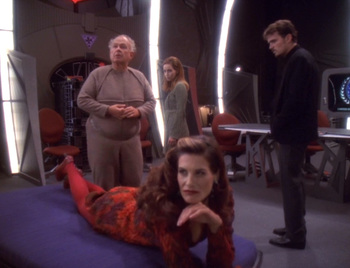 Rather colorful bunch.
After "Doctor Bashir, I Presume," in which it is revealed that Doctor Bashir's parents had subjected him to illegal genetic engineering—which usually disqualifies people from from serving in Starfleet—Bashir no longer has to hide his genetically engineered status. This makes it possible for him to openly research treating those who have been disabled by genetic engineering in some way. The doctor has four such victims brought to Deep Space Nine to study directly. The 'Jack Pack,' however, prove to be a disruptive presence on the station.
Advertisement:

After preventing a ploy that would have been a significant strategic victory for the Dominion, however, Starfleet engages their services as analysts. They quickly prove their value and gain the respect of Starfleet Command...until the four decide that there's no way for the Federation to win the Dominion War, and advise the Federation to surrender.

When Starfleet refuses, the 'Jack Pack' undertake a plan to bring the war to an early end by handing vital information over to the Dominion.