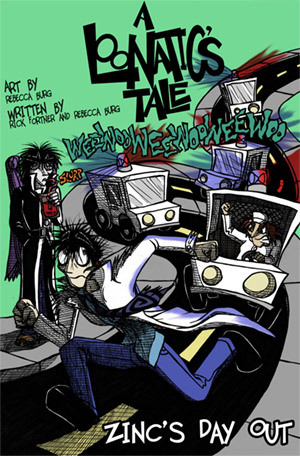 by Rebecca Burg (Artist and co-writer) and Rick Fortner (co-writer) is a webcomic about...

Well, it's a tale. About a bunch of Loonatics. Specifically, it's centered on the adventures of Riley Zinc and Flint Dartson, as they start work for the King of Mercia as a team of "elite" freelancers. While the cast is still being introduced, we have so far met what appears to be the central group of the comic, and the story can only grow from there with a unique art style, a wide range of character personalities, and constant fourth-wall breaking.

The story itself has been a long time in development, starting from the first issue, "Zinc's Day Out", in early 2007 and beginning the fourth issue, "Talking to Myself", in August 2009. As well, there have been two one-shot comics ("Vagabond" and "Crossbones") that have been posted, adding more depth to the world and as-yet unknown characters in the main comic.

If the site layout is an issue, Rebecca also posts the comics on her DeviantArt account, found here