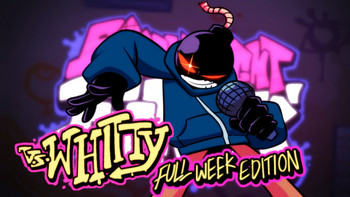 . The mod, once starting as just a single original level, evolved into an entire three song in-game Week developed by the trio. This mod in particular became one of the most popular ones for Funkin players, largely due to its design and professional development being so close to the vanilla game that it could fool players into thinking that it was an official Week made by NinjaMuffin and his crew.

This Week stars SockClip's titular original character, Whitmore (Whitty, for short), a Lean and Mean, hoodie-wearing, short-tempered, hot-headed, anthropomorphic-bomb-man-robot-guy who also happens to be an ex-rockstar, just like Daddy Dearest. Apparently he had some bad blood with Ol' Red Eyes and nowadays would just rather be left alone, a comfort soon taken away from him when Boyfriend and Girlfriend catch him in a back alley and decide to antagonize him ...for no particular reason. They're in for a nasty surprise, however, as Whitty's got a bit of a short fuse, and if they really wanna push his buttons... well, he'll just have to show them how much of a warhead he can be...

The mod had a full week completed, and additional content was being developed. Unfortunately, due to a controversy and harassment of the parties involved, SockClip has indefinitely ceased development and it seems likely that the game will not see additional updates. See the Trivia page for more details.

Well, with one exception. A separate mod intended for the expansion, and the only survivor of the pack, is The Date Week

, a crossover with VS Carol that also cements the two as an Official Couple as well as a Grand Finale for Whitty, as his original mod will no longer be available for download from the source.

"Well, how bout you go list some tropes in a ditch instead?":