Series / A for Andromeda 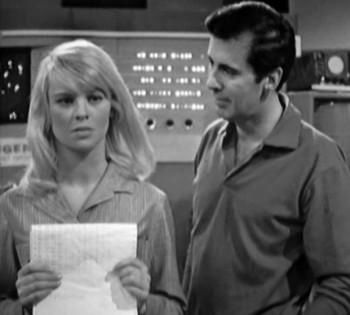 Julie Christie as Andromeda and Peter Halliday as John Fleming.
"Our intelligence is going to take over and yours is going to die. You'll go the way of the dinosaurs."
Advertisement:

A radio message from the distant Andromeda galaxy gives instructions on how to build a Master Computer which can aid mankind. The computer then creates synthetic lifeforms to serve it — first a protoplasmic organism, and then a beautiful Emotionless Girl whom the scientists call Andromeda. When Andromeda helps resolve an international crisis, hot-headed mathematician John Fleming believes that the computer and its creation are planning to make the world dependent on them, with the eventual goal of superseding humanity altogether.

A for Andromeda has been remade twice; first by the Italian television station RAI in 1972 and later by the BBC in 2006. A sequel The Andromeda Breakthrough was made by the BBC in 1962. Roger Fleming and Andromeda are kidnapped and taken to a Middle Eastern country where another computer has been built by Mega-Corp Intel, based on stolen plans of the first. At the same time freak weather conditions herald the End of the World as We Know It, and the scientists must make use of the computer in an attempt to avert the disaster.

The Andromeda Breakthrough also has: