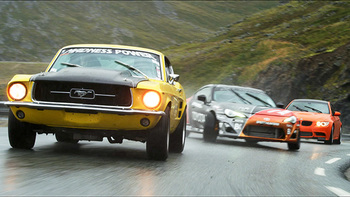 Børning is a Norwegian Road Movie from 2014 about a mechanic and amateur drag racer named Roy, who all throughout his life's been feuding with fellow gearhead and street racer TT about the merits of American muscle cars vs the Japanese dito. Hoping to finally settle the matter once and for all, they decide to race each other from Oslo to Nordkap. That's 2000 kilometers to go, with the cops in hot pursuit. The winner gets 100 Norwegian kronor. Things don't get any easier when all of Roy and TT's friends, as well as a bunch of Swedes in German sports cars, AND Roys rebellious daughter, decide to come along for the ride.

A classic car chase action comedy, deeply inspired by Smokey and the Bandit, The Cannonball Run, The Fast and the Furious, Initial D and of course Pinchcliffe Grand Prix.

Sequel called Børning 2 was released in 2016, this time putting Roy on an arctic street race from Bergen to Murmansk, crossing over four countries.