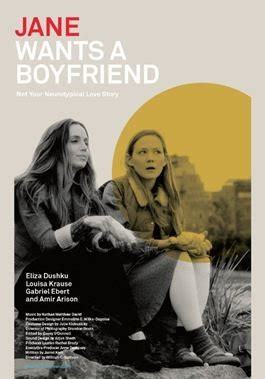 Jane Wants a Boyfriend is a 2015 American Romantic Comedy written by Jarret Kerr and directed by William C. Sullivan.
Advertisement:

Jane (Louisa Krause), a 25-year-old woman with Asperger syndrome, is moving in with her controlling older sister Bianca (Eliza Dushku), a stage actress. Inspired by Bianca's engagement to Rob Shay (Amir Arison), she decides to get a boyfriend for herself. She hits it off with Bianca's friend Jack (Gabriel Ebert), but Bianca thinks Jack is too unreliable and tries to stop him from dating her sister.