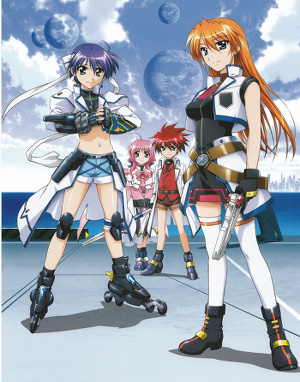 StrikerS Sound Stage X is a two-disc self-contained Audio Drama story, part of the Nanoha franchise. Taking place three years after Magical Girl Lyrical Nanoha StrikerS, it excluded everyone introduced before that, with the exception of minor character Mariel and revolved around a new incident that the heroes must handle.

What appeared to be an ordinary Serial Killer case that Enforcer Teana was investigating turns out to be something more sinister as ancient texts that speak of the undead Super Soldier army of Mariage led by the Dark King Ixpellia are uncovered together with the identity of a terrorist named Tredia who plans to use them. With the threat of a Zombie Apocalypse looming over the horizon, Subaru and friends must battle the Mariage, and locate both Ixpellia and the mastermind behind this latest terrorist attack before it's too late.

NOTE: Only general tropes for the series are listed here. For character-specific ones, check out the character pages.