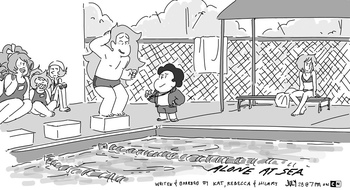 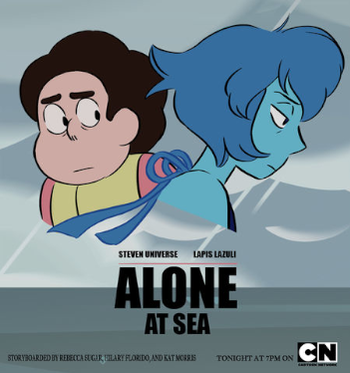 Steven leads Lapis down a pier with her water wings over her eyes. She tells him that she thinks she's starting to guess the surprise. Steven replies that he told her to close her eyes. Lapis does so, and opens them to... Greg and a boat.

Steven: Surprise! We bought a boat!

Greg hastily corrects him: They rented a boat, as even with his new royalties, buying a boat would be going a bit... overboard. Lapis asks who this new human is:

Greg: Uh, Greg Universe. You broke my leg trying to use the ocean to fly back to your Homeworld?
Lapis: Lapis Lazuli. Nice to meet you.

Lapis is understandably hesitant about the whole idea, but Steven encourages her to give it a try: She may have had a horrible experience under the ocean with Jasper, but Lapis isn't Malachite any more, and water is a part of who she is. The boat trip will be loads of fun. They even named it 'Lil Lappy'!

Cut to the side of the boat, with Greg hastily re-sticking a piece of paper reading 'Lil Lappy' over the name S. S. Misery. Lapis laughs, and agrees to give the plan a chance...but only one. She picks up Steven and flies him onto the boat.

The trip get off to a rocky beginning when Greg forgets to un-moor the boat, accidentally taking off part of the pier, and offers his captain's hat to Lapis. Lapis doesn't think that's a good idea; they shouldn't trust her with the boat. Steven suggests that they can all be First Mates instead, so there's no pressure! The mood soon turns light-hearted, with the three dramatically drinking orange juice (or levitating it, in Lapis' case), and Lapis and Steven having fun with the boat's horn.

After getting tired of the horn, Lapis and Steven run down to meet Greg, who's fishing over the side of the boat. Lapis cheerfully says she can help, closes her eyes, and levitates a huge ball of water full of fish. Steven is excited by this, but Greg carefully suggests that they might want to stick to the old-fashioned method. Lapis releases the ball of water, and Greg explains how fishing with a rod works. He casts a line into the water and the three of them wait... and wait...

Lapis: So, when does the fish part happen?

Greg begins to explain that sometimes it's about the company, not the fish, when there's a tug on the line! He hands the rod to Lapis, who begins to reel it in — but there's a harder tug, and Steven and Greg have to grab onto Lapis to keep her on board. An ominous shadow appears under the water, and something pulls on the line hard enough to snap the rod in half, sending the trio sprawling to the deck.

Lapis jumps back to the railing, peering over the side at the now-clear ocean. Steven tries to reassure her about the fish getting away, but it's clear Lapis' mood has taken a downturn.

Greg muses that his pole rental has turned into a pole purchase, and heads back to the cabin. Steven turns to ask Lapis what she wants to do, and finds her sitting hunched over on one of the deck chairs. He tries to cheer he up, complimenting her fishing and suggesting a new game to cheer her up. ("Shuffleboard!")

At this point a huge jolt rocks the boat. It's quickly followed by another, and Steven hurries to the cabin to find Greg consulting the Owner's Manual, which apparently isn't much help. Something's the matter with the boat: Greg heard a noise (which Steven didn't), and now the rudder isn't working. There's a series of loud clanks, and then a crash which shakes the boat. Greg opens the door to the engine room, releasing a cloud of smoke.

Greg: (Coughing) Crud, the engine! I don't know how to fix an engine! This trip might be a little longer than we thought, little buddy.

Steven goes to bring Lapis the bad news, and finds her standing at the rail, under an overcast sky. He tries to apologise: He just wanted Lapis to have fun, but everything's a mess. Lapis contradicts him. She thinks it's her fault: She's trying to have fun, but she can't stop thinking about being Malachite, battling against Jasper and using all her will to hold them down.

Steven: But it's not like that any more. You don't have to be with Jasper.
Lapis: That's not it, I...I miss her.

Steven reacts in shock. Lapis tells him that they were fused for so long... Steven says that Jasper's terrible, and Lapis bursts out that she's terrible, listing the things she's done and yelling at Steven to tell her she's wrong.

The boat shakes again...and a hand comes out of the sea and grabs the anchor chain.

A familiar orange figure scales the anchor chain and leaps over the railing.

Jasper looks a little more unhinged than she did in Jailbreak. She reveals that she's been following them — specifically, she's been following Lapis. She starts towards Lapis, and Steven steps in between them, summoning his shield. Jasper stops, and starts laughing. Still laughing, she tells Steven he's pointing his shield the wrong way; Lapis is the one he should be afraid of. Lapis objects, and Jasper responds that Lapis can't lie to her — she's seen what Lapis is capable of.

Jasper: I thought I was a brute, but you? You're a monster.

Steven does it for her: He yells that Lapis doesn't want anything to do with Jasper. Jasper growls that "This is between us!", and knocks him flying across the deck. Lapis hurries toward him, only for Jasper to grab her arm and drag her back —

—and gets down on her knees, clasping Lapis' hand with both of her own.

Apparently after all that time fused together, Jasper started loving the power and Flight that Malachite brought her. Lapis is confused; she took out all her anger on Jasper — it was bad! Jasper desperately insists that it'll be better this time.

Lapis refuses. What she and Jasper had wasn't healthy, and she never wants to feel that way again. She tells Jasper to just go. Jasper starts to argue, and Steven backs Lapis up — she said she didn't want to fuse, and Jasper should go. Jasper rounds on him, furious, and yells that this is all his fault. She charges, intending to shatter his gem.

Lapis throws her hand up, and a massive water hand punches through the boat and flings Jasper away.

As the boat sinks, Lapis flies Greg and Steven to safety. Greg sadly muses that he bought a boat after all.

Steven: The ocean's really beautiful from up here.
Lapis: Yeah. It is.