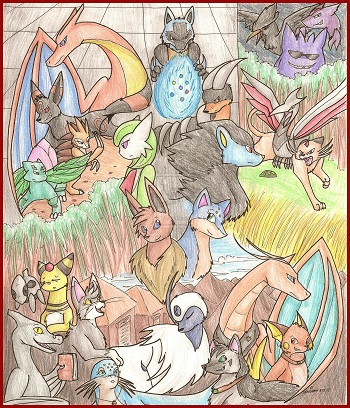 The main four heroes are in the middle. Clockwise from upper left, they are: Syena, Reece, Josie, and Nick. And then there's a bunch more people.

Shinka: The Last Eevee is a Pokémon webcomic written and drawn by SilverLunarwing.

The comic follows two friends, Nick the Eevee and Josie the Quilava, who live in a forest on the outskirts of Dynamon City, where they make a living doing various deliveries for other Pokémon in the area. Both of them have amnesia, which gave them a reason to bond after they met.

Meanwhile, a company known as Auranova Industries begins working towards a mysterious goal under the direction of Krypton the Lucario. Part of this scheme involves the seven Eeveelutions, six of which are already captive at Auranova Headquarters. Not all of Auranova's employees endorse this, however — two such dissenters are the partners Reece the Luxray and Syena the Gardevoir, both of whom have also had dealings with Josie in the past.

One day, Nick and Josie receive a letter from a Linoone offering a Lunar Wing as a reward, a mysterious artifact that is said to restore memories. They accept the request, not realizing that doing so would change their lives forever...

The comic has recently been rebooted, with the story being incredibly different. You can find the most recent page here