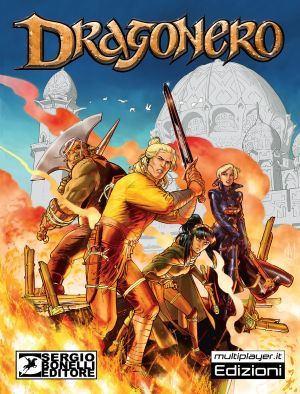 Drago Nero (Black Dragon in English) is an Italian fantasy comic book published by Bonelli (of Tex and Dylan Dog fame) which originally started as a one-shot graphic novel but then it became an ongoing series with issue 0 being published in May 2013.
Advertisement:

The story is focused on Ian Aranill, also known as Dragonero due to the dark color of the blade of his sword which it became magically after slaying a dragon. Ian is an imperial scout who is a descendant from a dynasty of dragon slayers. He usually gets hired by The Empire to do several quests in distant places. In his journeys he gathered a team of companions. Ian has also several magical powers gained after accidentally drinking the blood of a black dragon.

A Tabletop RPG based on the comic, and also published by Bonelli, was released in November 2013.