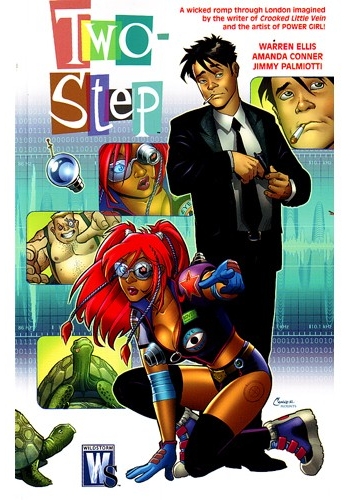 A 2003 three-part comic miniseries written by Warren Ellis and illustrated by Amanda Conner and Jimmy Palmiotti, Two-Step is the story of Rosi Blades, jaded walking webcam, and Tony Ling, freelance black market agent with an interest in Zen philosophy. The two meet in an alternate present London and embark on the chase of a lifetime down the crowded streets of the city, instigating trouble with the notorious Quarry gang, studying the philosophical underpinnings of human flight, and narrowly evading an encounter with a particularly horrible destiny by riding a Vespa down a hundred-story building. It could be all in a day's work, if that's the sort of work you're into.

The series was finally collected, along with original artwork and Warren Ellis' script, in November 2010, and is published by WildStorm.

These comic books provide examples of: