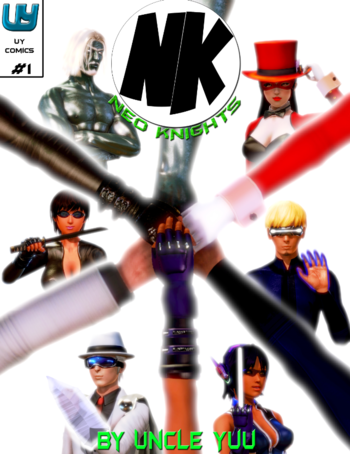 First step of being a hero? Cool costume.
"We've got a job to do don't we? So what if there are people who hate us, that's life and we just gotta pull through it!"
— Lucy Lennon
Advertisement:

is a Superhero Slice Of Life Webcomic by UncleYuu uploaded daily on Deviantart. In present-day Chicago, reports and rumors of superpowered beings are swarming the streets. Snake women, guys in tights and so much more. Lucy Lennon, a high-school senior with dreams of being an ass-kicking superhero can't help but be curious, especially after one, Johnny Caproni AKA Captain Frost saves her life. After he is injured in the line of duty, Lucy joins his team, The Neo Knights, dedicated to protecting Chicago's citizens from rampant crime as well as any possible superpowered threats. Taking up the mantle of The Commander Queen, she joins Frost in his mission with the aide of his Brilliant, but Lazy Mission control, Aaron Sampson. More members eventually join including Lucy's enemy turned friend, Koko Ray, former pro wrestler Maaz Kasim and the compassionate Bibiana Rodriguez all taking up a cape and costume to help those in need. Along with the struggles of being superheroes, their day to day tasks come to bite them in the butt, from romances to family drama.

However, an old foe of Frost, the extremely dangerous Kronus is out for blood and wants nothing more than to kill Frost and take his powers for his own. Along the way, more enemies show up for the Neo Knights, super and non-super alike. From snake women and killer dolls to simple politicians. Despite all these struggles, the Neo Knights seek to keep up their mission, but perhaps their mission goes far beyond a simple neighborhood watch with heat vision?

Combining Slice-of-life drama and comedy with superhero action, what makes Neo Knights so attractive are the 6 main characters and their interactions off of each other, coming across off as a family rather than a standard superhero team. They have all the expected hate and love that come from a family. Read it all here!