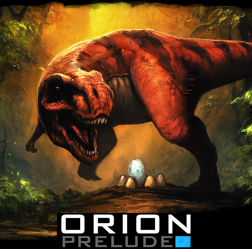 ORION: Prelude (formerly known as ORION: Dino Horde and before that ORION: Dino Beatdown) is an indie Sci-Fi First-Person Shooter that puts you and your friends together into intense, cinematic battles using some of the most incredible weaponry and amazing vehicles in which you must work or compete against one another to accomplish mission objectives, explore giant worlds and survive the devastating Dinosaur Horde.
Advertisement:

Created by Spiral Game Studios and Published by Trek Industries, when the game was first released in 2013 it was considered, in the lead developers own words "one of the worst games of all time". However, over three years the game has received countless free updates and even renames, and is notable for being a surprisingly cheap game, currently sitting at less than $1 USD.