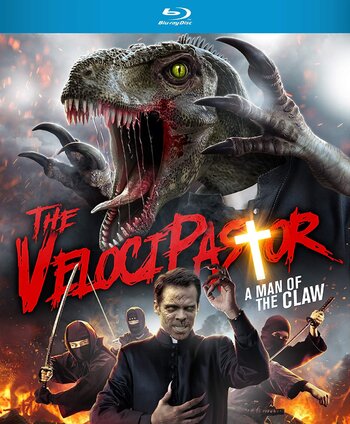 "Last night was... amazing."
"What are you talking about?"
"The time you turned into a dinosaur and ate someone."
"WHAT?!"
— Official Trailer

The VelociPastor is a 2019 horror-science fiction-action-comedy in which a priest gains the power to transform into a dinosaur and kill evildoers.

Pastor Doug Jones (Greg Cohan) witnesses his parents' death and is left questioning his faith. During a trip to China to clear his head, he witnesses a woman be mortally wounded by a Ninja. She gives him a mysterious artifact that accidentally infects him when he cuts his hand. Back home again, he begins to feel strange urges which leads to him transforming into a velociraptor. He decides to use his curse for good and unleash his inner beast on evildoers.

Starting out as a 2011 fake trailer that gained a cult following, the filmmakers expanded the idea out to a full motion picture. Shot on a low budget, this intentionally hokey film repeatedly draws attention to its own cheapness and ludicrous premise.