Film / The Vast of Night 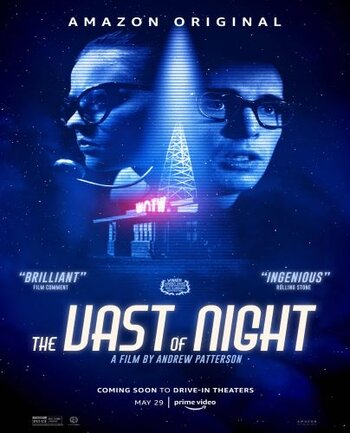 There's something in the sky.
Advertisement:

The Vast of Night is a microbudget science fiction thriller film and the directorial debut of Andrew Patterson. The film is presented as an episode of a science fiction anthology series along the lines of The Twilight Zone (1959) or The Outer Limits (1963), and tells the story of two high school audiophiles in a small New Mexico town in The '50s who pick up a mysterious frequency of unknown origin.

The film screened at the Slamdance Film Festival and 2019 and was picked up by Amazon Studios later that year. It was eventually released on Amazon Prime in May 2020, while also showing at various drive-in theaters.

The Vast of Tropes: