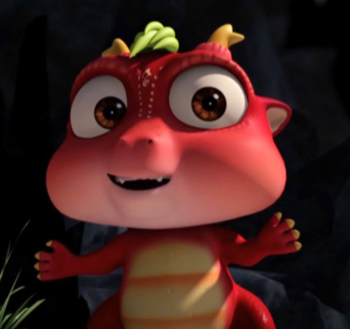 A long long time ago, there reigned over the land a virtuous Dinosaur King. Everything was good until a power-hungry courtier, the diabolical sorcerer-fox, cast a spell upon the poor king that turned his heart from good to evil. A sense of foreboding, a portent of doom, swept over the kingdom. On the night of a lunar eclipse, the spellbound ruler shall draw the life force away from his subjects, the unfortunate forest animals. They tremble with fear, they hope help will come and they look for a savior - for a very long time …
Advertisement:

Until now - in a faraway corner of the forest, a loose boulder bounces down a marble mountain to land at its base. Days later, it cracks open revealing an egg.On that night, a lunar eclipse occurs, the egg stirs and hatches a red baby dinosaur. He is Abu, son of the feared Dinosaur King. Taken under the tutelage of an old and wise lemur, the hatchling grows in strength and skills, desperate to save his father from himself, and his fellow forest dwellers.

But first, he has to take on the fox’s sidekicks, a fierce dog duo that guards his mountain lair - and other wild creatures with gnashing teeth and slashing claws like a tiger and panther. And he has to find and collect 6 magical tokens. When he has gathered them all, the little dino shall be empowered with the awesome prowess of a grown-up dinosaur. Accompanied by and aided by his friends, a crow, monkey and panda, whose weak abilities, silly clumsiness and funny antics are more than compensated by their loyalty to him, the Red One embarks on a perilous quest. An unlikely hero, Abu, the little dinosaur with a small fiery breath and not much else, and a whole load of responsibility, but he has a big heart - kind, brave and determined - and loyal friends, as he fights the mighty and cunning sorcerer-fox and his fiendish allies, save and redeem his father, the enchanted King, save the forest animals and thus, fulfill his destiny.

And so, a great adventure unfolds in HD 3D/CG-animated spectacular splendor - scary, embarrassing and sad yet exciting, funny and inspiring. And above all, goodness and bravery shall triumph over evil and fear.

Currently, this show can be seen in the US through Shorts HD.