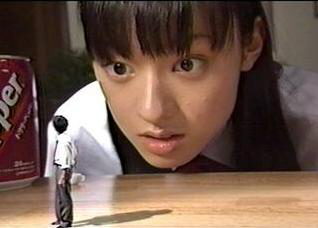 Oyayubihime is a Japanese TV horror movie, released in 1999 and starring Chiaki Kuriyama. It was part of the series Kowai Douma, which featured horror reinterpretations of fairy tales, in this particular case, Thumbelina.

Shy and studious Saeko has a crush on a boy in her class named Yuiichi. One night, she meets a strange man at a flea market, who encourages her to be open about her feelings, and gives her a red potion to use on him. The next day, she gathers her courage and confesses her love to Yuichi, however, to her dismay, he is not interested in her. As a last desperate attempt to get him to return her feelings, she throws the red potion at him. The potion does not have the expected effect however, and Yuiichi shrinks down to the size of a figurine.

The film was never released on DVD, so it is difficult to obtain a hard copy. However the full film has been uploaded on YouTube