Film / The Kids Are Alright 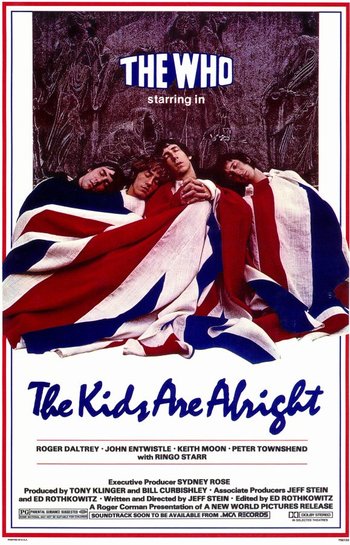 ...and all tucked up in bed.
Advertisement:

The Kids Are Alright is a 1979 rockumentary about The Who, titled after one of the songs from My Generation.

Director Jeff Stein, who had worked with the band as a teenager, wanted to create a collection of visual history for fans and approached Pete Townsend. The film comprises live performances, promotional videos, and recorded interviews with the band.

As has been done with beloved television shows, Stein wasted no expense to scrounge old broadcasting sheds in over eight countries (eight that you could name, though) over the next two years to rescue any film reel with a hint of the band in order to make this masterpiece that would never hit major popularity and would be completed overshadowed by an indie drama in 2010. Stein also proved not very good at his scavenger hunt and so new material had to be filmed at Shepperton Studios and at Keith Moon's California beach home, as well as recording some of the band's big hits during tours that couldn't be recovered elsewhere.

The group in some places had to re-dub some of their own musical performances on tape and soundtrack, either because the recording proved bad or they weren't pleased with how they had sounded. Apologies to everyone in the 1969 Woodstock crowd. Moon also died during the sound editing, and the band decided to not change anything further once he had.

Not to be confused with said 2010 The Kids Are All Right, about lesbians and The Hulk or The Kids Are Alright (2018), a Dom Com about an Irish-American family during the 1970's.