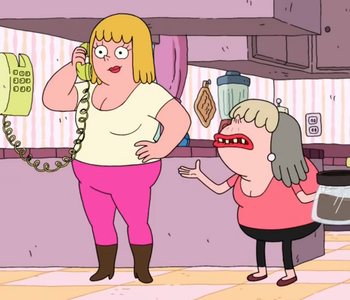 Don't you just hate it when you're on the phone and your mother's interrupting you? Yep, we all have that sometimes.
Advertisement:

Remember, we have Spoilers Off, so all spoilers are unmarked! Read 'em if it's worth it.

Pretty Great Day with a Girl

Lost In The Supermarket

Clarence Gets a Girlfriend

Man of the House

Too Gross for Comfort

Where the Wild Chads Are