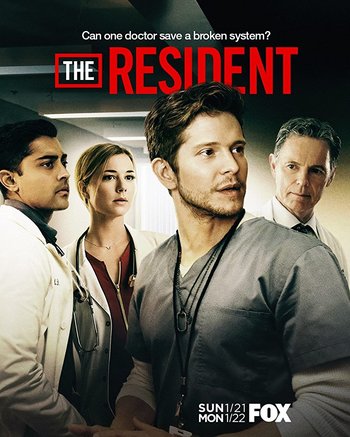 It stars Matt Czuchry as the titular resident, Emily VanCamp as the best nurse ever, Manish Dayal as a Wide-Eyed Idealist intern, Bruce Greenwood as a chief of surgery (and later CEO) with an increasing propensity to commit medical errors, Shaunette Renée Wilson as a surgical resident with a brusque bedside manor, and Malcolm-Jamal Warner as a crack cardiothoracic surgeon with "an ego the size of Texas."

In the show's first season, Melina Kanakaredes played a sweet-talking oncologist with a dark side, and Merrin Dungey played the hospital CEO.

The Resident contains examples of the following tropes: