Series / I Hate My Teenage Daughter 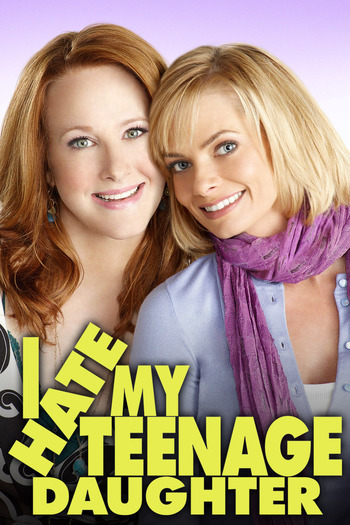 Nikki and Annie, looking happier than they are.
Advertisement:

I Hate My Teenage Daughter is an American Sitcom that ran on FOX from November 30, 2011 to March 20, 2012. The series stars Jaime Pressly and Katie Finneran as the mothers of two highly problematic girls (Kristi Lauren and Aisha Dee, respectively).

The series followed two mothers who fear their daughters are turning into exactly the kind of girls they had to endure in high school. And with good reason: Annie Watson (Pressly), who grew up in an ultra-strict conservative family, begins to notice that she has allowed her daughter Sophie (Lauren) to do what she wants to do, which she takes advantage of by embarrassing and mocking her mother; her best friend Nikki Miller (Finneran), who grew up unpopular and overweight and has reinvented herself as a Southern Belle, begins to notice how manipulative her daughter Mackenzie (Dee) has become. They declare their mission in no uncertain terms: remedy their misfires, straighten out their daughters, before it's too late.

Even the ex-husbands are not good fathers: Annie's ex Matt is too clueless, prompting his lawyer brother Jack (Kevin Rahm) to step in (and become an object of Annie's crush) while Nikki's ex Gary is letting their complicated relationship become more complicated in the parenting department. These situations are among the major challenges Annie and Nikki face to keep their daughters from turning into the people they were afraid of at that age.