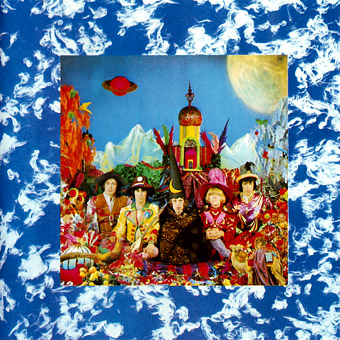 "Why don't we sing this song all together? / Open our heads, let the pictures come / And if we close all our eyes together / Then we will see where we all come from."
Advertisement:

Their Satanic Majesties Request is the sixth studio album (eighth American album) by The Rolling Stones, released in 1967. The album cover is well-known for being one of the very first 3D album covers. Their Satanic Majesties Request remains contested, as it's the Stones at their most experimental. It was recorded during a tumultuous time in the band's history, when Mick Jagger, Brian Jones and Keith Richards were under threat of prison charges for drug possession. Bill Wyman even got one of his songs ("In Another Land") on the album, and it's the only Stones song with Wyman on lead vocals.

Another reason the album got mixed reviews at the time was because it followed in the wake of The Beatles' Sgt. Pepper's Lonely Hearts Club Band earlier that year and many saw it as a blatant rip-off, both in music as well as design. John Lennon expressed this opinion too in a 1971 interview, also saying that "She's a Rainbow" was an imitation of "All You Need Is Love" from Magical Mystery Tour. Which is somewhat a strange opinion, seeing that both Lennon and Paul McCartney provided uncredited backing vocals on some of the songs from this album and that the Stones themselves saluted Sgt. Pepper's Lonely Hearts Club Band on the album cover. Also, graphic artist Michael Cooper designed the covers of both albums, thus unfavourable comparisons would be unavoidable.

While its generally not remembered for being among the Stones finest albums - several of the songs have become highly popular, including Mick Jagger's own favourites - "She's a Rainbow" and "2000 Light Years from Home", while "Citadel", "In Another Land" and "2000 Man" are also well regarded today.