What Do You Mean, It Wasn't Made on Drugs? 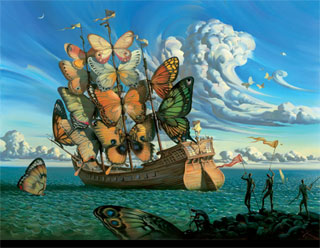 Departure of the Winged Ship

Otto: Whoa! A talking dog! What were you guys smokin' when you came up with that?
David X. Cohen: We were eating rotisserie chicken.
— The Simpsons
Advertisement:

Any work whose creation seems to have involved large amounts of hallucinogens, cocaine, crack, or any other illicit substance that makes people think really weird ideas are also really good ones. The plot hinges on bizarre transformations, freakish-looking creatures, and nonsensical actions that only seem to make sense in realms of logic far removed from your own. That it was the product of a drugged mind looks like a foregone conclusion.

And then you find out that it most certainly wasn't.

A sad implication of this mindset is the misconception that truly creative works demand the use of mind-altering drugs — which, if you are a creator who wasn't taking drugs but gets this accusation leveled at your work, can be something highly insulting (as it diminishes a creator's own creativity and inventiveness). And in real life, meaningfully composing any work of art (or doing anything more complex than opening a door, for that matter) is borderline impossible when tripping on hallucinogens like DMT or mescaline. Most admitted users of psychedelics tend to do their work between trips, not during (whether or not said work is inspired by the trips).note A notable exception is Robert Mapplethorpe, who according to his friend Patti Smith used to take LSD before working on specific art projects. Stuff like cocaine doesn't, in normal doses, actually make you hallucinate or think trippy things, though it does make doing more cocaine sound like a fantastic idea, and heroic single doses or a long history of heavy cocaine use has been documented to cause psychotic breaks of one kind or another.

Creators with Bipolar Disorder are prone to this, as manic

phases create symptoms that are similar to drug intoxication. As mania can loosely be considered the real-life equivalent of The Madness Place, it's unsurprising that quite a number of magna opera are created under such circumstances, but a manic phase can just as easily be the source of a 500-page Author Tract on Word Salad Philosophy that has even the author baffled when they stabilize.

Commonly uttered in response to a Widget Series, Big-Lipped Alligator Moment, a particularly egregious Makes Just as Much Sense in Context moment, or Dada Ad. Compare with Mind Screw (which refers to works that are densely symbolic and/or surreal) and of course This Is Your Premise on Drugs. And enjoy this Onion AV Club inventory of notably trippy children's shows

The previous acts of this Rock Opera were rather somber, cynical, or both. While this animatic plays with color contrasts and shifts throughout, this instance is the most notable: to mark the bizarre turn of events, the illustrations turn from black and white (which it had been for the past three segments) to bright color to mark the sudden whimsical, surreal atmosphere.

Example of:
Monochrome to Color

Alternative Title(s): Wasnt Made On Drugs

The previous acts of this Rock Opera were rather somber, cynical, or both. While this animatic plays with color contrasts and shifts throughout, this instance is the most notable: to mark the bizarre turn of events, the illustrations turn from black and white (which it had been for the past three segments) to bright color to mark the sudden whimsical, surreal atmosphere.