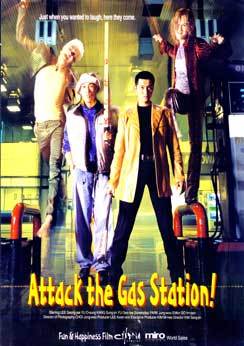 Attack the Gas Station! is a 1999 South Korean comedy film. A gang of four disaffected young men (No-Mark, Rockstar, Paint and Mad Dog), bored and fed up with their existence in urban South Korea, decide to rob a gas station they held up earlier that week (according to the title cards, either "Just because", or "For fun!"). When the spineless manager of the station lies to them about where the money is kept, they decide instead to hold the attendants hostage, fill the tank of anyone who comes in and pocket the money for themselves. As the night goes on, stranger and stranger things start happening to them, including run-ins with gangsters, politicians, angry delivery boys, a noisy car which keeps driving past, and the police.

Rule of Cool and Rule of Funny are in wide use here. This film could be considered a Lighter and Softer take on such crime comedies as Lock, Stock & Two Smoking Barrels, which is also about four small-time criminals who get in over their heads, although in a different way. At the same time, it features commentary on the socioeconomic and educational conditions of modern South Korea and the effects they have on its youth.

Tropes in Attack the Gas Station! include: