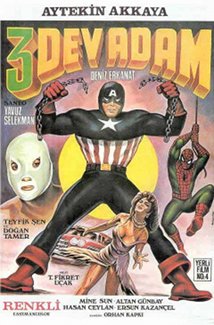 Of course, the characters were used without permission from their owners, and some of them have little in common with their original counterparts. Perhaps the most important things to highlight are that Captain America now has no shield, El Santo goes maskless multiple times, and Spider-Man is a bad guy who wants to create counterfeit dollars For the Evulz.

For the curious, the whole movie can be found here

and there's an indepth review with lots of pictures here