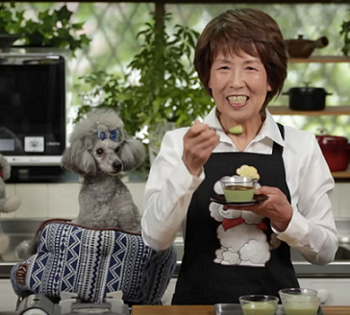 Francis and Chef.
"Hi, I am Francis, the host of this show, Cooking with Dog."

Cooking With Dog is a series of YouTube cooking videos showing how to prepare various Japanese dishes. The dog part comes from the show's "host" and narrator Francis, a grey Poodle, and not because they cook with dog meat.

You can watch the videos at their YouTube channel here.

Cooking With Dog features examples of:

"Good luck in the kitchen!"