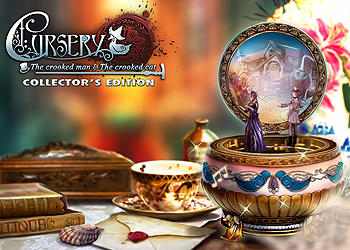 This isn't your normal nursery rhyme...

Cursery was going to be a series of hidden object games produced by Blue Tea Games, in a similar vein to the Dark Parables. This time, the idea was to put a Darker and Edgier twist on the Mother Goose nursery rhymes.

The only game in the series, The Crooked Man and the Crooked Cat

, was released in November 2013 and is a spin on the "Crooked Man" rhyme. Blue Tea Games has since discontinued work on PC games in favor of focusing on their mobile franchises, so it's unlikely that the series will continue.

Tropes present throughout the series include: