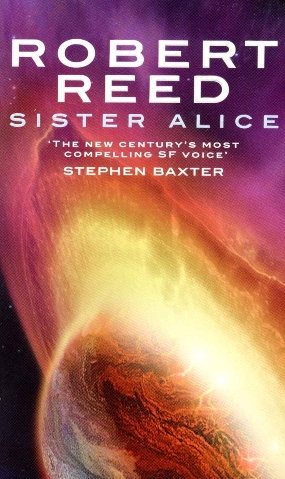 Sister Alice is a Space Opera / Science Fantasy novel by Robert Reed, published in 2003. The novel is broken up into five "books" in chronological order, contained in the paperback or hardback book.
Advertisement:

After millions of years of constant warfare that destroyed entire solar systems and killed untold billions of lives, the battered nations convene, and reach a decision to build a lasting peace; One thousand Great Families are to be made, to enforce the peace and build a better future; the Great Peace. The Families serve the peace by exploring, creating diplomatic ties, trading, engineering enormous habitats, and terraforming worlds for the masses. The older the member of a Family is, the faster they think and the more powerful they become.

The novel follows the story of Ord Chamberlain, the 24,411th and youngest Chamberlain - a Great Family renowned for its terraforming and greatness - ten million years into the Great Peace.

Sister Alice
When Ord is a mere 50 years old, Sister Alice, the 12th Chamberlain, suddenly arrives on the Chamberlain estate on Earth in total secrecy, after working in the galactic core for thousands of years. Alice befriends Ord and aids him in his Snowars, as she prepares herself for her trial as the galactic core explodes from opening a portal into another universe.

The following tropes are contained in Sister Alice and in the universe:

Advertisement:
Brother Perfect
Brother Perfect takes place several hundred years later, after Sister Alice's trial and imprisonment, and after her talents are stripped. The Great Peace is hanging together by a thread as the coreward worlds flee their impending doom. Ord is visited by a hidden aspect of Alice, who tells him to search for Brother Perfect, Upon finding Perfect, Perfect augments Ord with Alice's stripped talents, to hold together what Alice swore to protect - The Great Peace.

The following tropes are contained in Brother Perfect:

Mother Death
After the revelation that Ord has escaped from the Chamberlain Estate, stolen Alice's talents from a secure holding facility, then attacked a Nuyen Family member, the Nuyen Family brands Ord as a traitor, and begins to systematically disband and hunt down all Chamberlains and the other families who participated in the Core experiments, then assumes control of Council. The Galactic Core explosion continues to radiate out, and a steady stream of the wealthiest beings in the galaxy are pouring towards Earth, as refugees. Outright war is consuming the Coreward worlds, with billions upon billions of citizens dying and hundreds of planets being destroyed in fanatical wars over ideology and resources. Fanatical paranoia on Earth has citizens being tracked by A.I.s and informants, all to determine if Ord is infiltrating Earth to rescue Alice.

Meanwhile, Ord is using his stolen talents to stave of war as much as he possibly can, using light touches of power to cause alliances to collapse on themselves.

Baby's Fire
After Earth's destruction from the Nuyen booby-trap, Ord flees to the Galactic Core, with Ravleen hunting him down.
Father to the Man
Ord uses Alice's hidden wormhole linking back the past, to attempt to prevent the original universe creation experiment from ever happening, by attempting to use his massive supply of memories and figures to sway the ancient Family members tending to the universe creation machinery.