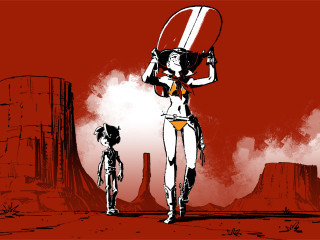 Bikini Cowboy is a graphic novel by Luke Weber that was originally released digitally in 2013.

The story is set in the 1800's and focuses on Whisky Jill, a bikini-clad cowgirl with a surfboard who goes on a spiritual journey with a young boy with powers named Rod McCloud.