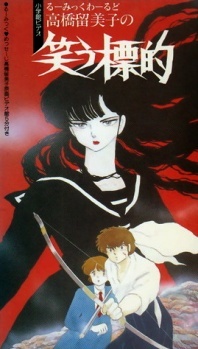 One of the more obscure works from Rumiko Takahashi of Ranma ½ and Inuyasha fame, The Laughing Target (Warau Hyōteki) is a 1983 horror one-shot manga that was later adapted into an OVA in 1987. While using some popular tropes from Takahashi, it takes a darker turn by playing them for drama. It also features one of the first examples of a modern Yandere.

The story goes as follows: Yuzuru Shiga is the last descendant of a branch of the Shiga family. As the family is an ancient clan that is about to disappear, the parents agree that the best course of action for the clan is to get him married with his cousin, Azusa. Yuzuru moves out to Tokyo to study, and years later Asuza's mother dies in mysterious curcumstances.

Meanwhile, Yuzuru is now living a normal life as the lead of the school's archery team not paying much attention to the arrangement, and also has a girlfriend called Satomi. Unfortunately, Azusa comes to Tokyo to seal the deal, and chaos ensues.

Yuzuru: Dear God, Azusa! That was how long ago?? We were only children then!
Azusa: So? Is there anything wrong with promises made by children? Are they any less sacred?