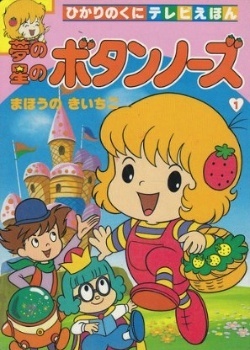 Yume no Hoshi no Button Nose (Button Nose of the Star of Dreams) was Sanrio's first foray into anime, giving one of their characters her own show. The series took two years to produce, with some of the animation done by Topcraft, and aired from October 19, 1985 to April 26, 1986 on TV Asahi.

The series focused on Button Nose, a little girl who had been left in charge of her home while her parents were away. One night, a robot came to her house to pick up some strawberries. When Button Nose saw his spaceship, she accidentally started it and landed on his home planet. The king of the planet happened to be a relative of hers and invited her to stay on the planet.

In the next episode, the king fell sick and Button Nose went out to find a cure. While he recuperated, Button Nose was made temporary ruler of his kingdom. The episode after that featured him leaving on a trip around the universe, leaving Button Nose in charge until the end of the series.

In 1994, Saban Entertainment dubbed the anime into English, and while it did not air in the USA, it was a regular sight on Fox Kids in Europe and Latin America. It also aired in Australia on Network Ten.