The cast of Knights of Sidonia and associated tropes. Beware of unmarked heavy spoilers. 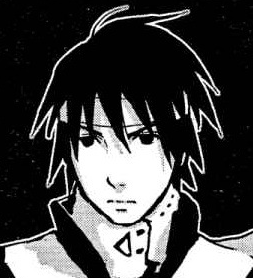 The protagonist of the series, Nagate was raised in isolation in the depths of Sidonia, with only his grandfather Hiroki Saito and a Guardian pilot simulator for company. Nagate discovers society once his food supply runs out and is forced to search for more. Captured by the local authorities of Sidonia, once his grandfather's identity as a famous pilot is discovered, Sidonia's government puts him on the road for elite Guardian training.

Nagate faces many hardships adapting to society and his duties as a pilot, but finds friendship and love among his peers. Eventually, he finds more comfort in his role in society, and becomes Sidonia's best pilot. 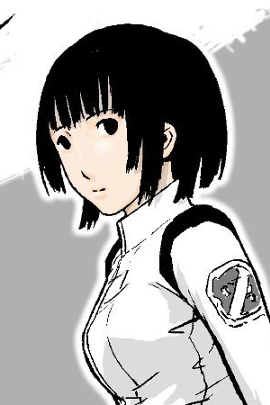 The second-ranked trainee in Nagate's class at the start of the series, Hoshijiro is Nagate's main Love Interest, being the first woman he ever saw and felt romantic affection for. Following the battle with the Gauna mimicking Yamano Eiko and being rescued by Nagate, she reciprocates his feelings.

This turns out to be a rather brief relationship, as in their next mission Hoshijiro is killed saving Nagate and assimilated by a Gauna, her memories and DNA used for creating a trio of powerful Guardian-type Gauna. Gauna 489 and 491 are killed in their first sortie, but Gauna 490 - implied to be the same Gauna that assimilated Shizuka - escapes and becomes a reoccurring antagonist, codenamed "Crimson Hawk Moth". An Ena sample of Gauna 491 shaped like Hoshijiro is retrieved by Nagate, and is eventually used by Ochiai to give birth to Tsumugi and later Kanata. However, a second Ena sample was retrieved from Gauna 490, and was later implanted with Tsumugi's consciousness. 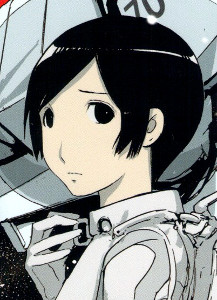 One of Nagate's fellow pilot trainees at the series' beginning and a person of the third gender. One of the first people to befriend Nagate and treat him as a fellow human being, Izana proves to be his closest friend as the series progresses, and a source of great moral support. Izana quickly develops feelings for Nagate, which go mostly unnoticed due to his lack of social awareness.

Izana eventually becomes a regular pilot and loses an arm and a leg at the hands of the Crimson Hawk Moth, but obtains mechanical limbs to compensate. 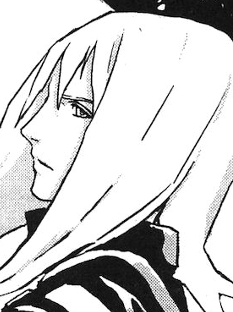 The highest-ranked trainee in Nagate's class and heir to Kunato Industries, the company developing the Type 18 Guardians that compose most of Sidonia's main force at the start of the series. An arrogant and vain man with little respect for his peers, Kunato develops a rivalry with Nagate due to him being assigned the Tsugumori, who he viewed as rightfully his. He sees Nagate as a thief of his glory and takes every opportunity he can to hurt or embarrass him. This culminates in him sabotaging a mission that results in Hoshijiro's death and assimilation by Gauna.

After retiring from being a pilot to focus on his father's company, Kunato undergoes emotional turmoil when he realizes that Nagate still accepts him, even if he can't forgive him for causing Hoshijiro's death. While trying to make amends and find technology that could help Sidonia, his body is secretly hijacked by the mind of Ochiai.

Norio's cloned sister and voice of conscience. She is murdered by Ochiai's doll and resurrected as his puppet.
The Honoka Sisters 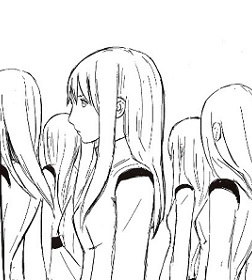 A "family" of clones created for Kobayashi to form a dedicated pilot force. 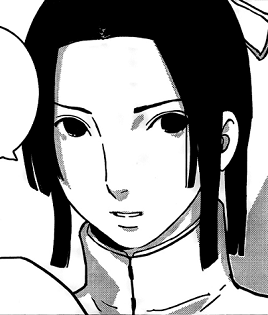 The mysterious, mask-wearing captain of Sidonia. A capable and experienced leader, she leads Sidonia through its crises with determination and ruthlessness. It is later revealed that she is immortal, alongside the rest of Sidonia's council, and that she personally knew Hiroki Saito, Nagate's "grandfather", which is why she helped him become a pilot.

A female human/bear and retired Garde pilot who runs the cadet dorm (a literal "Dorm Mother"). While kind and matronly, you do not want to provoke her temper. She's another member of the original Immortal Ship Committee, and best friends with Hiroki Saito. She left the committee after Saito had a falling out with them, and later covered his escape after he swiped Nagate from the cloning faculty. 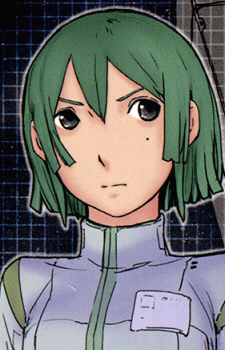 A bright and calculating girl, Yuhata becomes a friend of Izana and Nagate after the latter terminates the Gauna that killed her brother, a member of Akai's squad. Quickly developing feelings for Nagate, she constantly competes with Izana for his attention.

Yuhata later becomes the assistant commander for Guardian operations due to her talent for battle tactics.

Nagate's "grandfather", a legendary guardian pilot and also one of the original founding members of the Sidonia's Immortal Committee. He was the Sidonia's top Ace for centuries until 100 years ago when Ochiai deliberately abandoned all 28 Kabizashi in space, leaving the Ship defenseless. It only took him only 4 minutes to locate and retrieve the Kabizashi, but in that time 99 percent of the ship's population had been consumed by the Gauna. Finally burnt out after 500 years of service, Saito retired from piloting and stopped ingesting the immortality drugs that were keeping him young and fit. He went missing soon afterwords, and it was over 80 years before Kobayashi and Lala finally managed to locate him. In that time, old age had finally caught up to him and he was in failing health; despite this, he refused to seek medical attention or get a brain transplant into a younger body, as he simply wanted to age and die like a normal person. Kobayashi, however, was not about to let the Sidonia loose it's top ace, so she sent a sample of his cells of to the cloning labs, leading to the creation of Nagate. When Saito learned that he had been cloned a replacement body without his consent, it was the final straw. Considering Nagate his "son", he fought his way into the Cloning labs and took him out of his incubator prematurely. Kobayashi and Lala then arrived on the scene with reinforcements and tried to make him stand down, but Saito would have none of it. Declaring his intention to raise and train Nagate himself, he fought off the security team (with a little help from Lala), and then vanished into bowels of the Sidonia.

Izana's grandmother and an immortal crew member. Dr. Shinatose was the scientist who managed to save Sidonia's knowledge from Ochiai's brain and devised the plan to repopulate Sidonia with genetically engineered clones after almost the whole population was killed at the end of the Fourth Defensive War against the Gauna. 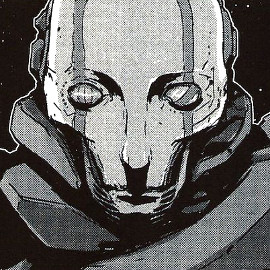 A member of the pilot squad who first killed a Gauna when the Kabi were found. Became a member of Sidonia's immortal council alongside Kobayashi, Hiroki and Lala. An advocate of transhumanism, he became a full-fledged Mad Scientist with a god complex over the years and became infamous for his numerous experiments with Gauna, even creating a half-human hybrid of such. Eventually, he nearly caused the destruction of Sidonia 100 years prior to the series' start, and destroyed half of the ship's accumulated knowledge, storing it in an auxiliary brain, hoping to use it as leverage so that he could keep his life.

Through Yure Shinatose's efforts, his brain was transplanted into a clone and his memories were sealed away so that the auxiliary brain could be safely accessed. Said clone now works loyally and efficiently for Sidonia, working as an intermediate of Kobayashi.

He makes a comeback when Kunato enters one of his laboratories and hijacks his body, pretending to be him. Using the Ena-copy of Hoshijiro recovered by Nagate and his knowledge, he creates a Chimera named Tsumugi. He later creates a second chimera, Kanata.

A clone of Ochiai created to serve as a key to unlocking his locked-away auxiliary brain. Kobayashi co-opted him to act as her Number Two, and he is loyal to her and to the Sidonia.

The head scientist of the OSLnote outer space lifeform-research who is responsible for the task of observing Gauna 491's captured Ena replica. She's taken over by one of Ochiai's blood nematodes when she realizes he'd taken over Kunato's body.

Following Shizuka Hoshijiro's assimilation by the Gauna, three Garde-shaped Gauna, dubbed GA-489 through 491, were encountered. While 489 and 491 were dispatched with relative ease, Gauna-490 displayed a sadistic intelligence and escaped to become a reoccurring antagonist, earning the moniker "Crimson Hawk Moth". GA-491's "Ena pilot" was captured by Nagate, developing a childlike personality and retaining fragments of Shizuka's memories, but was taken and impregnated by Ochiai, giving birth to Tsumugi Shiraui and Kanata. Gauna-490 became a reoccurring antagonist before being destroyed by Tsumugi and Nagate, though her Ena pilot was secured before the destruction of her true body, and was later implanted with Tsumugi's consciousness. 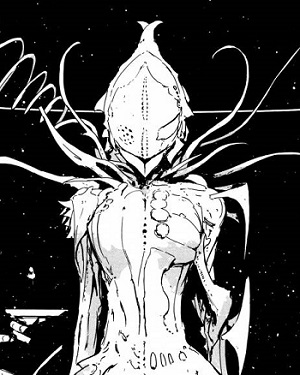 Half-human and half-Gauna, Tsumugi was created from the first Hoshijiro Ena and Ochiai's knowledge of Gauna as a chimera, a bio-weapon of mass destruction. Despite having astoundingly devastating powers, Tsumugi has an very gentle, curious, and kind-hearted personality comparable to that of a child's. She feels a connection to Nagate that is reciprocated immediately, probably because of who her "mother" is. She becomes close friends with him and Izana, and they serve to ground her and keep her from doing reckless things.

Despite being fully aware of her origins and the motive for her creation, her innocence and loyalty towards her 'father' make her one of Sidonia's greatest assets.

The second chimera born from the first captured Hoshijiro Ena and Ochiai, he proved to be far more unstable than his sister. Curiosity got the better of him when exploring the research labs and he suffered a mental breakdown, blasting a hole through the hull of the Sidonia in the process. In Chapter 64, he is released by Ochiai and taken over. 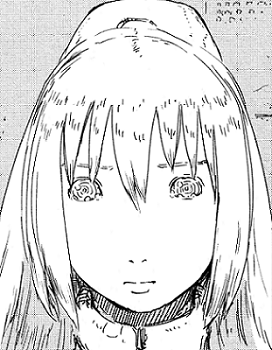 A gynoid created by the pacifist movement who was stranded on Lem-IX. She initially blames Nagate for the deaths of the colonists and the Gauna attacks, but develops a Tsundere attraction to him after he rescues her.