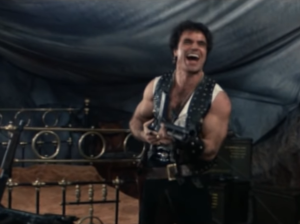 Hello, all you tropers out there! I am Dablone! Ha Ha Ha!

Why? Because what you really want is ME! Dablone! Ha! You don't want pansy tropes with wimpy names. You want BIG VOICE and BIG GUN and DABLONE! So why'd they change the name, you say?

It's because they are jealous of Dablone. They look at all attention Toblerone has and they envy me. They say I don't have good name. They say it's too mixed-up with sweet, sweet candy. But that's okay. Let them change it. Ha! I will be right here! Waiting for them! Just when they think they have gotten rid of Dablone, they will click the link and BAM! Ha Ha!

Ha Ha! Dablone see you, silly Troper! This is real page! Other page merely pale imitation of me!