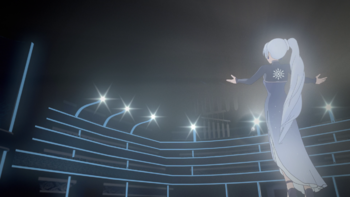 I won’t be possessed, burdened by your royal test.
I will not surrender. This life. Is. Mine!
Steve Goldshein, Alex Abraham and Jeff Williams (and his daughter Casey) are just plain incredible at what they do. Every episode has a versatile soundtrack that makes the show all the more worth it to watch. From soft piano reprises and tear jerking pieces from episodes like "The Stray" to might-as-well-be-making-a-music-video from the team fights in "Players and Pieces" and "Painting the Town", the music has a life of its own and brings both the fight animations and the voice acting up to a much higher level. Honestly, it's much more challenging to find examples of pieces that aren't examples of awesome music than to find ones that are. Nevertheless, the list below showcases some of the best and brightest work from the RWBY soundtrack.
Advertisement: