Of Runaways and Stowaways 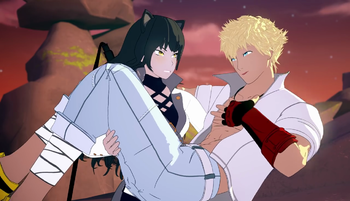 "My hero!"
Written by Miles Luna & Kerry Shawcross
Directed by Kerry Shawcross, Gray G. Haddock & Miles Luna
"Well, not many people travel by boat on their own. It can be quite a lonely voyage. But I found those that do tend to have the more... interesting stories."
— The Captain

On her way to Menagerie, Blake meets up with an old friend.

Back at home, Yang deals with the aftermath of her injury.

"What are you planning?"