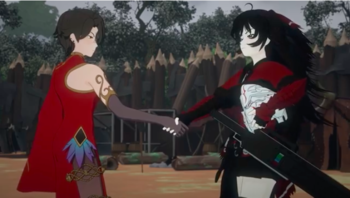 A deal with the devil.
Written by Miles Luna & Kerry Shawcross
Directed by Kerry Shawcross, Gray G. Haddock & Miles Luna
"There is a slim chance you and your Maiden could escape today, but if you know our master as well as you claim to, then you know you could never truly escape her. But we come bearing an olive branch."
— Cinder Fall

Salem's forces proposition Raven Branwen, but Raven decides to change the agreement in favor of all parties. Back in Menagerie, Sun and Ghira face off against the Albain brothers while Blake runs off to find her mother.

"This path won't be easy for us either, but we must do what's right for the tribe."