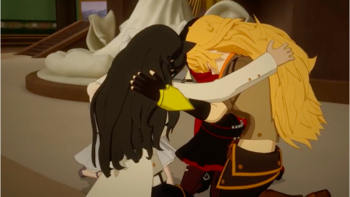 "That's all that matters... that we're all here together. Right?"
Written by Miles Luna & Kerry Shawcross
Directed by Kerry Shawcross, Gray G. Haddock & Miles Luna
"You don't know the first thing about strength! You turn your back on people, you run away when things get too hard, you put others in harm's way instead of yourself!"
— Yang Xiao Long to Raven Branwen

As the battle for Haven reaches its conclusion on the surface, Yang confronts her mother at the relic vault.