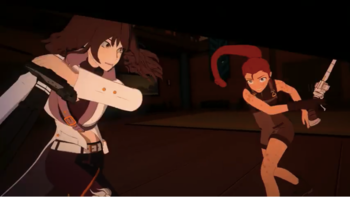 "We did this."
Written by Miles Luna & Kerry Shawcross
Directed by Kerry Shawcross, Gray G. Haddock & Miles Luna
Blake: Why do you feel like we have to hurt people to get our way?!
Ilia: Because it works!
Blake: That doesn't make it right!
Advertisement:

Ruby talks relics with Ozpin and Qrow while Raven meets with Leo. Meanwhile, the attack on the Belladonna house is still going on. Blake and Ilia fight for their ideals.

"We're going to need shields, training, whatever we can do to protect as many people as possible."