Known by its Song 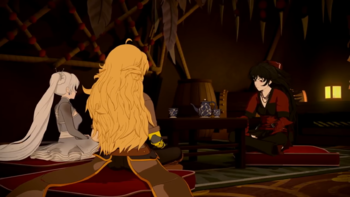 "The truth is that 'truth' is hard to come by."
Written by Miles Luna & Kerry Shawcross
Directed by Kerry Shawcross, Gray G. Haddock & Miles Luna
"I'm giving you a choice. Stay here, with me, and I'll answer all your questions and more. We can have a fresh start. Or... you can go back to Qrow and join Ozpin's impossible war against Salem, and meet the same fate as so many others."
— Raven Branwen

Qrow seeks out Huntsmen and Huntresses to aide in the fight against Salem, while Yang and Weiss prod answers out of Raven.