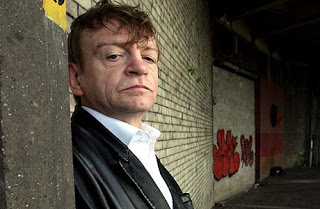 "Hey there fuckface, hey there fuckface!"
—from "The Classical"
"If it's me and your granny on bongos, it's The Fall"
—Mark E. Smith
Advertisement:
"Always different, always the same"
—John Peel

The Fall were a 'country and northern' Post-Punk band from Manchester, England. The favorite band of legendary BBC DJ John Peel, The Fall were formed in 1976 by iconoclastic weirdo Mark E. Smith, and since then the band has had more lineup changes than perhaps any band ever, with Smith being the sole constant member.

Other than Smith, the Fall has had a handful of members that are beloved by fans and spent long tenures with the band, but band members often quit or are fired with almost every album. In fact, after the release of Fall Heads Roll in 2005, the entire band quit on Smith (excluding his keyboardist wife Elena Poulou) in the middle of the night while the band was staying at a hotel in the American Southwest. Smith and Poulou recuperated with a rush-job band and the hastily recorded Reformation Post-TLC in 2007, and after one more lineup change in 2008, the band solidified into its most stable incarnation, remaining virtually unchanged until Poulou left before their final album. The last lineup was Smith, guitarist Peter Greenway, bassist David Spurr, drummer Keiron Melling, and keyboardist Michael Clapham.

Smith died from cancer on 24 January 2018, bringing an end to The Fall forever.

Despite the constant lineup changes, the band was extremely prolific (for most of their career, they released an album annually) and recorded a staggering 32 studio albums between 1979 and 2017.