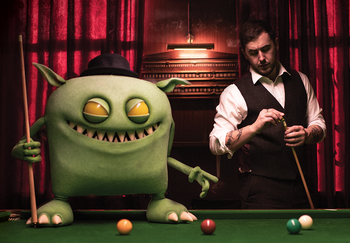 Love is all they got.
Advertisement:

Jonathan "Jon" Gooch (born August 22, 1984) is a British electronic music producer, best known under the aliases Feed Me and Spor.

Gooch first started releasing music under the Spor name in 2004. The project's propulsive, moody take on drum 'n bass and early neurofunk made him a cult favorite in the scene, releasing singles on influential labels like Lifted, UKF and Vision Recordings and contributing remixes for artists like Basement Jaxx and Muse.

Feed Me, Gooch's most popular project, emerged in 2008 as an outlet for his electro house and dubstep work, debuting with the track "Mordez Moi." His first three EPs under the name, Feed Me's Big Adventure, To the Stars and Feed Me's Escape From Electric Mountain, established the project's energetic sound and propelled him to popularity in the scene with some help from deadmau5 and his label mau5trap.

Gooch would go on to start a label of his own, Sotto Voce Records, where he would release his first full-length album under the Feed Me name, Calamari Tuesday, in 2013, and a Spor album called Caligo in 2015. Each project's broad intent has remained intact over the course of his discography, but over time Gooch's output as Feed Me adopted more experimental edges in line with his work as Spor (albeit with a more melodic twist), while his Spor work has adopted a level of production polish recognizable in his Feed Me tunes — the natural end result of switching between the two projects.

After several more EPs under the Feed Me name, Gooch returned to mau5trap for the project's second album, High Street Creeps, in 2019. He'd follow it up with a string of singles before releasing a self-titled third album in 2021.

Gooch's DnB releases proved more sporadic in the later 2010s, but the producer returned to his roots with the Black Eyed EP in 2016, the Anachronic EP four years later, and the Cave EP on mau5trap in 2022.

as Spor note The bulk of Gooch's releases as Spor in the 2000s were singles; for the sake of brevity, this list only includes EPs and full albums.