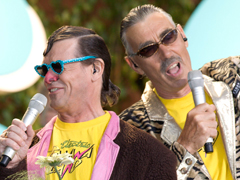 Pictured — Klasse Möllberg and Lasse Åberg. Not pictured — sanity, or any form of adult behavior. Oh — and Janne Schaffer, too.

The Electric Banana Band is a Swedish children's jazz/rock band formed in 1977.

In 1976, Lasse Åberg was given the task of making a series of children's shows on behalf of SVT ('Sveriges Television' or 'Swedish Television'). The result was Trazan Och Banarne — Lasse and Klasse Möllberg remade the studio into a jungle motif, and hosted the show themselves. It became a bang hit, but when the first season was going to be reprised, SVT discovered the tapes had been wiped accidentally, having confused the number for that show with another.

Undaunted, Åberg and Möllberg decided to do an entirely new show, which was broadcast in 1980. For this show, they created a band — The Electric Banana Band. Janne Schaffer was there as well, under the stage name 'The Zebra', whereas Åberg called himself 'The Tiger'. They played their music as the characters they played, and it worked out very well for them — they accomplished hits very quickly (Banankontakt, Zwampen, etc). Usually, Åberg does the lyrics, and Schaffer does the music.

In the 2006 Melodifestivalen, they appeared with their song "Chameleon", not having equal success there — they lost after two rounds.

Tropes that apply to them are...