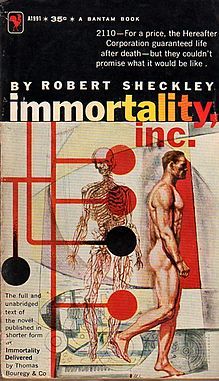 The cover of the first edition
Immortality Inc. is a Science Fiction novel by Robert Sheckley. It was serialized in 1958-9 in the Science Fiction Magazine Galaxy Science Fiction under the name "Time Killer",and released as a standalone novel as its current title later in 1959.
Advertisement:

It follows the adventures of Thomas Blaine, a man from 1958 brought to the year 2110 at the moment of his death. He struggles to live in a world where life after death is accepted by everyone, and as a result, life has lost inherent value. As he seeks to find a place in this new time, in a new body, he is forced to cope with a world completely different from his 1958 home.

It won a Hugo award for best novel in 1959. The movie Freejack is (very loosely) based on the novel.