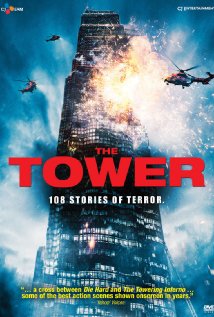 The Tower (or Tae-wo) is a 2012 Korean Spiritual Successor to The Towering Inferno.

The setting is the fictional Tower Sky, the tallest buildings in the world, modeled after the Petronas Towers in Malaysia, home to some of the wealthiest people in Seoul and cutting-edge in both technology and luxury. To celebrate Christmas, a VIP party is held in the "Sky garden" of the tower overlooking the river. Dae-ho, the manager of the building and single father, is forced to cancel plans with his daughter Ha-na to coordinate the event. However, Yoon-hee, the food mall manager (with a secret crush on Dae-ho), offers to babysit Ha-na during the party. Meanwhile, Kang Young-ki, the legendary fire captain of Yoido Station, has at the urging of Sergeant Oh Byung-Man and the rest of the crew, finally promised his first Christmas date night to his long suffering wife, while the station's new probationary fightfighter gets the sort of hazing that shows some things are universal the world over. During the party, it is discovered that the exterior pipes in the building have frozen over, rendering the sprinklers above the 60th floor inoperable. The party is in full swing when a fleet of helicopters fly overhead with snow-making machines, giving the building's VIPs a white Christmas, indoors!

Not to be confused with The Tower trope.

The Tower features examples of: